One of the best definitions of "theology" I know is from St. Anselm: Theology is "faith seeking understanding," i.e., the continuing process of trying to put our relationship with God (our "faith") into appropriate words and concepts, so that we can think about it and talk about it. We ALL need to participate in this. The role of "Parish Theologian" is to facilitate that process, to shape Adult Formation events that assist in it, and to help the congregation and its leadership reflect on our life together in light of our faith.

Since beginning this role in May of 2021, Denny Clark has facilitated learning opportunities related to Geography of the Holy Land, King David’s Leadership, Science, Religion, and Faithful Living, The Letter of James, Becoming a Living Kidney Donor, Weathering the Apocalyptic Storm, and Affordable Housing Crisis in Columbus. Recordings of many of these sessions are available through Zoom. Contact Denny for more information. 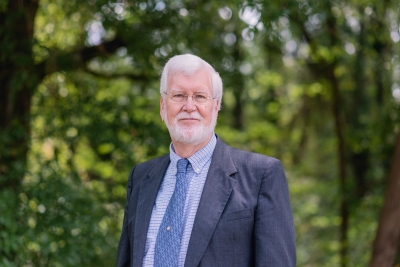 
Denny Clark has been teaching religious studies for well over thirty years, involving a wide variety of biblical, theological, and other religious courses — twenty-two years of which were at The College of Idaho. While there he was also on the Board of Directors for the Bethsaida Excavations Project in Israel and led multiple study tours to Israel/Palestine for college and community members.

He was previously a Lutheran pastor (ELCA), including service as the pastor-developer of a new congregation and as Lutheran campus pastor to the University of Chicago. Since moving to the Columbus area nearly ten years ago, he has taught part-time for a variety of educational institutions (including Columbus State University), and continues to teach online courses for Saint Leo University, a Benedictine Catholic university based near Tampa. In addition, he worked for Chattahoochee Valley Episcopal Ministry, and been involved in fostering inter-religious understanding and cooperation in the Columbus area.

Denny graduated from Aurora University with a B.A. in Theology and heavy minors in both Biology and Chemistry. Both his M.Div., which focused on Constructive Christian Thought and on Pastoral Ministry (which also included six months of Clinical Pastoral Education at the University of Chicago Hospitals & Clinics), and his Th.M. in New Testament were from Lutheran School of Theology at Chicago. His Ph.D. in Biblical Interpretation was from The Iliff School of Theology and the University of Denver.

October is one of the months when St. Thomas provides ex...

Church Directories are Ready! Use the form belo...

Confirmation and Reception into the Episcopal Church

When you join St. Thomas as a member, we also invite yo...

It is easy to join St. Thomas as a member. Just tell us you want to belong, and we'll enroll you as a baptized member of the congregation. If you've never been baptized, contact Rev. Grace to schedule a time for Holy Baptism. We look forward to being in touch with you.

Our Stewardship Committee decided to focus this year on sharing the “St. Thomas Story” with our wider community. “Love God. Love Every Person. Learn and Serve Together.” summarizes our mission.
St Thomas is a blessed community of the faithful. We look what is needed in the year to come, with your support.

We continue to invite gifts above your pledge to the Continuing Faithfulness Capital Fund so we are prepared to address major capital needs as they arise. There is still more to be done, and we are determined to meet these needs in stride with a reasoned and forward-looking approach.
Learn More