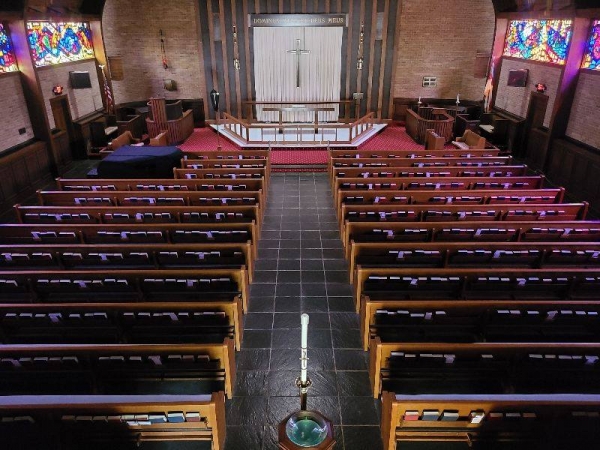 The Nave or Sanctuary is our setting for worship but is also a beautiful place to pray and find reminders of the story of God’s love for you. The words over the altar, Dominus Meus Et Deus Meus, are Latin for My Lord and My God which was a response attributed to Thomas, the doubting, disciple. The needlepoint in the sanctuary is by Margaret Baird, a beloved founder of the parish. The windows, from the Willett Studios, are made of faceted glass which is chipped on the inner surfaces to give a jewel-like appearance. The brilliantly colored glass varies in thickness from one to three inches to give a three-dimensional effect in some scenes.

The Old Testament story begins on the left wall as you face the altar and includes the following scenes: The Creation, Noah's Ark, Abraham's Sacrifice of Isaac, Moses and the Burning Bush, The Exodus, The Ten Commandments, The Ark of the Covenant, Joshua at Jericho, Samuel Anointing Saul, King David, The Temple of Solomon, The Babylonian Exile, The Prophet Isaiah, The Rebuilding of Jerusalem, and Daniel in the Lion's Den.

The New Testament story begins on the right wall and includes: The Nativity, The Baptism of Jesus, The Temptation of Jesus, The Sermon on the Mount, The Transfiguration, The Triumphal Entry, The Last Supper, Gethsemane, The Trial before Pilate, The Crucifixion, The Resurrection, St. Thomas and the Risen Christ, Pentecost, The Conversion of St. Paul, and The Alpha and Omega.

To the left as you exit the sanctuary is the Chapel of Reconciliation, which is a smaller worship space. The altar rail was made by Finley Willamson, a founding parishioner whose creative work with wood can be seen in other places in the church.

Following the hall that goes from the sanctuary to the Outreach Center, you will see glass doors on your left which lead into the Columbairum. Within the garden there is the Stone Circle of Prayer. According to Celtic tradition, small stones placed on graves carry the prayers of those who bring them. In keeping with that tradition, we have a stone circle of prayer beneath the Live Oak tree in the center of the garden. You are invited at any time to bring your stone prayers and leave them for anyone you wish to remember. The back gates of the Columbarium are open for visitors to come for prayer and remembrance at any time.

If you walk from the glass doors at the entrance to the sanctuary across the circular drive to the Peace Garden you will see a tall, white cross which was on the front of the church for many years. Beneath it are benches where you can sit. You will see a slender, black pylon which has words written on it in gold. The words are translations in many languages of the supplication, O God grant us peace in our time. The peace pylon was placed there with seed money donated by a support group for families of Desert Storm participants. Also beneath the cross is a marble inscription of the litany from Coventry Cathedral in England which was severely damaged during World War 2.

Wherever you go to meditate, may you find peace and an awareness of God’s presence and love for you.

Join us for Online Sunday Worship!

AmazonSmile is a meaningful and easy way for you to shop and have a portion of your purchase be donated to St. Thomas at no extra cost to you.